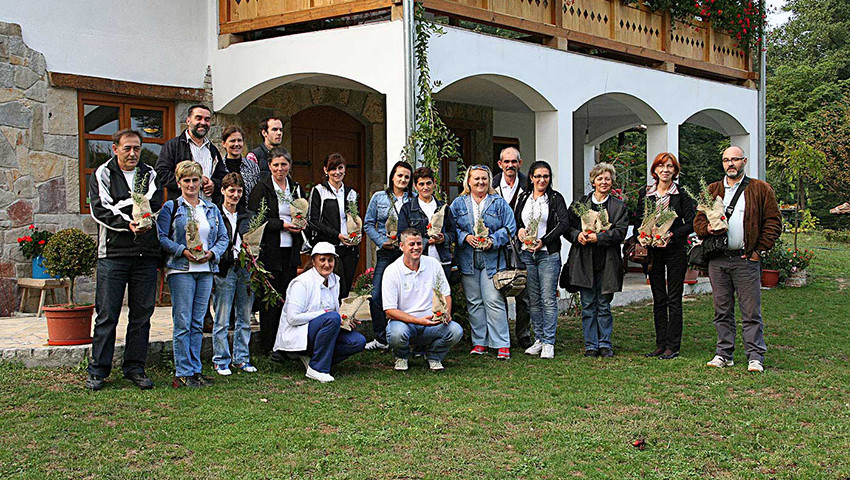 The project resembles an attempt to start the organized flower and decorative plant production in Nis and the surrounding area (for Nis, west Serbia and Belgrade market with the partner support).
To the exceptionally endangered group of village women, who were declared the  “marginalized group in the borders of the marginalized area”. The project strives to supply the elements of economic independence and security through employment with new and economically better jobs. The project relies on local production-market potentials and strives to maximalize them. The identified minimum of the prerequisites for the users is for them to own small parts of land and certain “practical knowledge” in agriculture, while the qualification can be achieved through non-formal education.  The project has greatly invested in creation of the more convenient environment for new economic activities by creating the analysis and follow-up informational-educational content. With its concept it attracted many potential partners, users attention and publicity with a large number of media who saw a different story and concrete results in the project.

Next to the one longer study trip (west and central Serbia), there were also some study visits realized. Some of them are visiting the local productions and the two-day visit to the exhibit. The theoretical education is always combined with a lot of practice with the seedlings, to make it concrete and likable to users.
Thanks to the expert education in nurturing, study trips and enterprise education, the users have gained a satisfying level of theoretical and practical knowledge from the area of horticulture, the models of organized productions are absolutely clear to them, variables of formal registration, selling possibilities, sources of development support and recognizing the strategic partners for further work. The users are established to estimate their productive values by themselves (can calculate the net-profit from the intensive production of some plant species). With the adequate support, they can make a simple development resource application in the local community by themselves, and greatly contribute to creation of their own business plans. The project is realized with a planned number of 50 starting users, while later, through theoretical education and study trips and visits, 12 users were highlighted, from which the 3 of them have started the economical work in different phases. We estimate that the number of direct users is larger than planned, considering the fact that there was a significant media interest caused. This is particularly seen in the big number of phone calls we have received, interest shown by women from other areas and their interest in the further continuation of the project.There was a particular cooperation achieved with the company „Biosan“, which has already signed many contracts about the long-term two-way cooperation, while the municipality of Pantelej has provided a part of their booths on the Durlan marketplace as a addition to the earlier claimed partnership commitments. The most important achievements are the first planted surfaces by 3 families, which started the production for the forwardly known customer. The project is realized thanks to the donation of Swiss Agency for Development and Cooperation / SDC Belgrade.