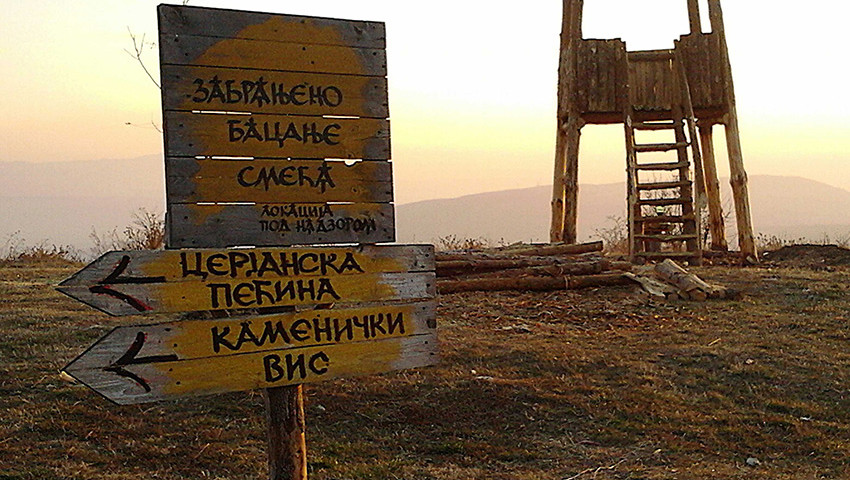 The situation in which multiple villages (Kamenica, Brenica, Cerje) and settlements (Vrbica, Kapetanove Pojate, Dabilo, Tripun i Vinik),  were outside the city garbage disposal system contributed to creation of the largest wild dump „Bela zemlja“ in the municipality of Pantelej/City of Niš.
The garbage, layering for decades, has reached about 10 meters of thickness with the dump core surfacing on about 3 ha, while the water and wind brought additional garbage. That  added another 2 ha to the dump’s size.
To make the damage even larger, the dump was “settled” on the location which has a great view to Nis and the surroundings, on the way that connects the most visited sites Kamenički vis and Dabilo with the town and so endangering the tourism development.
Thanks to the support of the resource ministry, municipality, JKP Mediana, volunteers  from Erste bank, child volunteers and people from Kamenica, we have succeeded in rehabilitation of the dump.
In the beginning, the dump was flattened by machines and covered with soil, and afterwards cleaned by hand and was planted seedlings on.
To complete the transformation and the name of the project justified, a look-out tower was built on the former dump.
In order to secure the result sustainability (to prevent restoring the dump), during the project signatures were collected and the garbage disposal from Kamenica was organized. Today, many other settlements who were involved in “garbage generation” are also involved in the garbage disposal system.
The location of the former dump “Bela zemlja” is turning into a picnic site, and it’s lookout spot is used by the people who come to admire the view, firefighters, gamekeepers, foresters…
Luckily, nothing else but pictures can remind us of the former state.